Today begins Feast Week, like Fleet Week – but think less sailors, more stuffing – face stuffing to be exact.  The eating doesn’t start today, but the preparation sure does.  And since it would be totally selfish to prep my feast and not help you prep yours, I’m going to share my Thanksgiving menu with you.

I’ll start by sharing my dessert recipes, partly because I have already shared these recipes and partly because pies can be made in advanced…like the day before.  Any earlier and you risk having a stale pie – uncool, totally uncool.

Apple Pie is a classic Thanksgiving dessert, and the classics are classics for a reason.  This is the pie that the phrase easy as pie was born from.

Click here to see the recipe for Easy Apple Pie.

Brownie S’mores Pie is another dessert I’m serving for Thanksgiving this year for a couple reasons.  This pie was a big hit at last year’s Thanksgiving, and it’s a perfect use for marshmallows, since I’m not using them on the sweet potatoes. 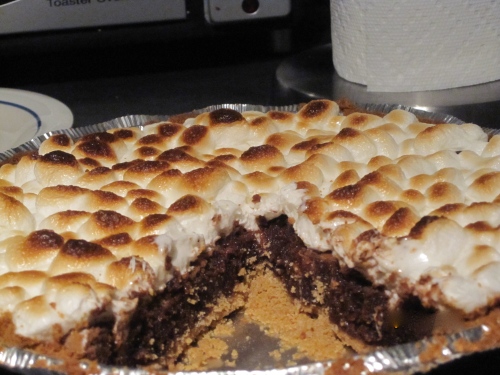 Click here to see the recipe for Brownie S’mores Pie.

Directions
Whip the heavy cream until it becomes whipped cream.  Then, place in the refrigerator.  Add the milk and vanilla bean to a small sauce pan over medium heat.  Heat the mixture until it starts to bubble along the edges.  Remove from the heat and let the mixture cool down for approximately 10 minutes.  Once cool, remove the vanilla bean.  Cut the bean in half lengthwise and scrap out the black seeds using the back of a knife.  Add the seeds back into the milk mixture and discard the now empty vanilla bean shell.

Bring a pot of water to a boil.  You will be using this to heat the custard mixture you are about to make.  Make sure the water does not come up too high, because it cannot touch the bottom of the bowl.   In a large, heatproof bowl (typically glass), whisk the egg yolks and sugar until creamy.  Once the pot of water is boiling, place the bowl on top of the pot.  Add the now cool milk and vanilla mixture to this bowl and continue to whisk.  Once the mixture is incorporated, stop whisking and begin stirring with a wooden spoon.  Stir this mixture until it becomes a custard – which means that it should be thick enough to coat the back of your spoon.  Be careful with the heat as this custard should not simmer! Once the mixture is thick enough, remove from the heat and let cool.  Once cool, fold in the whipped cream.  Transfer to your ice cream maker and follow the manufacturer’s instructions.

*Pictures will be displayed at the end of the week, so stay tuned my Bite-Sized readers…