There’s a new kid on the block, and by kid I mean restaurant and by block I mean neighborhood. Tribeca welcomed Kutsher’s with open arms, almost at the same time Demi pushed him out.  But, there’s no actual relation here.  Kutsher’s Tribeca is the new restaurant brought to you by the Kutsher Family, as in the Kutsher family who owns Kutsher’s Country Club in the Catskills.

The century old resort is infamous, well infamous to Jewish families in the tri-state area.  It’s been a second home to hardworking families, focusing on community, tradition, and of course, good food.  Just like its upstate predecessor, Kutsher’s Tribeca has the same goals of creating good food, which is exactly what it does.

Kutsher’s is reinventing what it means to be a JAB – Jewish American Bistro.   The menu is filled with nostalgic dishes that have a modern twist.   Chef Mark Spangenthal is turning old classics into new favorites.

One of my old favorites dates back to my camping days.  Kutsher’s put its spin on Bug Juice, to make an adult friendly drink for the kid inside of us. Although it’s normally made with Vodka, I ordered mine the Bite-Sized way, with tequila instead.  Tequila, home-made fruit punch and grapefruit bitters. But the most noteworthy part of this cocktail are the punch ice cubes.  As the cubes melt, the juice dissolves so the drink doesn’t get watered down.  Now that mixologist is a real mench! 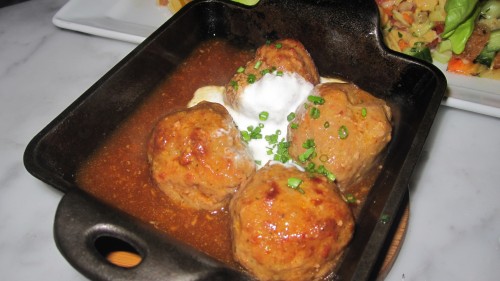 I couldn’t pass up Milton’s Short Rib & Brisket Meatballs with caramelized onions and creamy horseradish sauce and can you blame me? Such a whimsical spin on an old classic cannot be ignored! My hopes were high for this dish, and I definitely wasn’t disappointed.  The meatballs were tender and intensely flavorful.  They were totally reminiscent of mom’s brisket.

You know how much I love latkes, so of course I also ordered the Crispy Potato Latkes at Kutsher’s.  Well, really I asked for two orders of them, one with apple sauce and sour cream and one with caviar, in true Bite-Sized fashion.  They were crispy and dense, which made them the perfect vehicle for sweet apple sauce and salty caviar. 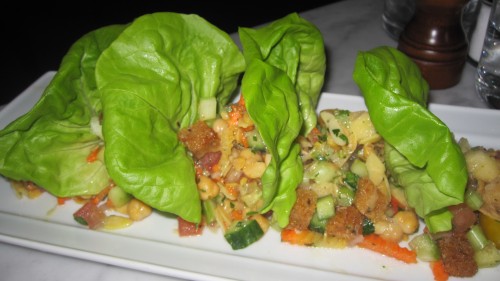 I have a hard time turning down Challah, so when I saw that the Country Club Chopped Salad had challah croutons, I decided it also had to be ordered.  Chickpeas, apples, cucumbers, cherry tomatoes, walnuts and challah croutons were mixed together on top of a bed of butter lettuce.  Tossed in a lemon honey vinaigrette, this salad was a delight, emphasis on the light.

We also ordered the Crispy Artichokes alla Judea.  The artichokes were lightly seasoned with lemon, garlic, parsley and paired with a salad of greens and shaved parmesan cheese.   The crisp greens balanced the salty artichokes and creamy cheese.  This small dish with big flavor was one of my favorite appetizers.

The Grilled Romanian Steak was intensely flavorful.  Caramelized onions and a well developed glaze made this steak unusually robust.  Each bite was better than the last.  It was served with a roasted garlic and mushroom knish that was less than stellar, but the steak was so delicious the knish was quickly forgotten. 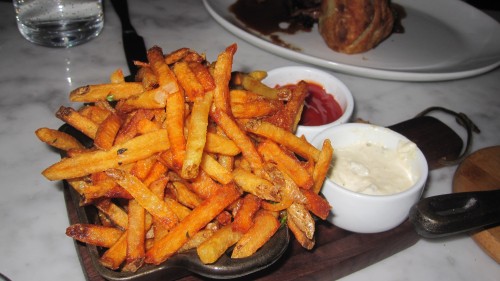 Some girls might run at the first sign of schmaltz, but not this Bite-Sized Blonde.  A little rendered fat never hurt anyone.  Okay, it might hurt someone.  Schmaltz and Svelte are not exactly words that go together.  But in the case of Schmaltz verse Svelte, Schmaltz always wins.   So, I ordered the Duck Schmaltz Fries.  They were perfectly crunchy on the outside but light and airy on the inside, the way all good fries should taste. 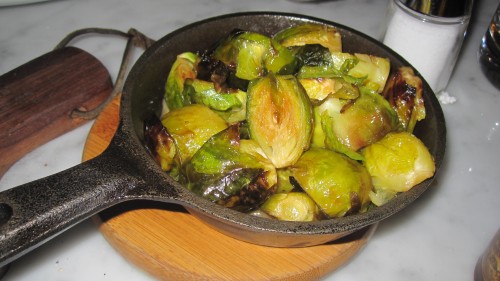 I ordered the Brussels Sprouts, because let’s face it, after the schmaltz, I needed a little green. The Brussels Sprouts were roasted with rosemary and olive oil for an earthy taste.  Simple sprouts, simply good.

Dinner isn’t over until the fat lady sings, or I get dessert, but after this meal, I was quickly on my way to becoming the fat lady.  Good thing I don’t sing. 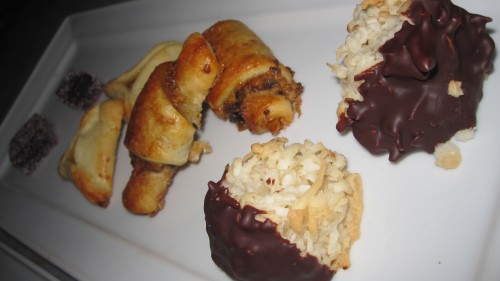 We started with the cookie plate, and yes I just said started.  You didn’t think that’s where dessert was going to begin and end did you? This was no ordinary cookie plate though.  Hamentashen, rugelach and macaroons filled this plate.  Another whimsical item on the menu that was so cleverly delicious!

St. Anselm, sounds like a name with power, and meaning I suppose.   I’m not sure who this St. Anselm guy is, but if I had to guess, I’d say he was the patron saint of all things delicious.  I mean, why else would they name a gem of a restaurant after him?

This tiny restaurant is not boastful.  In fact, it’s the opposite, which leads me to believe this St. Anselm dude was also pretty modest.  The restaurant is unpretentious.  But not in the Manhattan way that can actually be pretentious masquerading as low key.  This is BK unpretentious, which equals a literal translation.  The restaurant is dark, but surrounded by a glowing light force from the open kitchen.   You know I’m all about an open kitchen, see here, here and here.  Its fun to watch the chefs at work, but it’s also fun to check out their equipment.  This open kitchen isn’t exactly the most beautiful I’ve ever seen, but the food that comes out of there can be considered a work of art.

We started with the Clams.  They were fresh and salty.  Flavored with garlic and parsley, these tiny, little suckers were a bright way to start the meal.

We also ordered the Bibb Salad.  A pretty typical starter of crisp lettuce, plump tomatoes, crispy fried shallots and sweet shallot vinaigrette.  Simple but delicious or delicious but simple? Either way, you get the idea.

So you know that feeling you get when you hear music and you feel compelled to dance? Well that’s the feeling I get when I see a burger on the menu.  But think less dancing, more eating.  So, of course I ordered the Patty Melt.  The tender patty of meat was perfectly juicy and topped with Swiss cheese and caramelized onions.    The onions give the burger a subtle sweetness while the mild Swiss cheese makes it slightly salty.   Complete with toasted white bread and spicy pickles, this patty melt was one for the books. 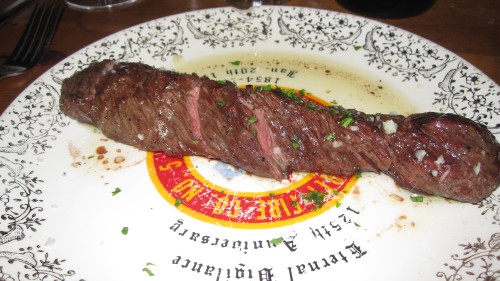 But, if you go to St. Anselm and don’t have the appetite to order everything (weird), the one thing you cannot, and I repeat, cannot pass up is the Butcher’s Steak with Garlic Butter.  This is one of the best steaks I have ever had in my entire life. The butcher’s steak is also known as a hanger steak.  The reason behind the name? This cut of meat is known for its flavor, so butchers used to keep it for themselves rather than sell it! After eating this steak, you’ll understand why.  The meat is incredibly tender and flavorful.  The grill gives it a deep flavor.  With a hint of saltiness, and a touch of butter, this steak is melt in your mouth magnificent.  Besides the fact that this is one outrageous piece of meat, it’s also $15. Yes, you read the correctly.  This is the best $15 I’ve ever spent in my life.

What’s a steak without a side? Similar to chips without dip, which is something this Bite-Sized Blonde is totally against.  So, for sides we ordered the Shishito Peppers, Pan Fried Mashed Potatoes with Truffle Oil, and Grilled Berkshire Bacon.  The peppers were smoky from the grill, but maintained their spicy flavor.  Not every shishito pepper you eat is spicy.  But eater beware, the spicy ones can hurt a little.

The Pan Fried Mashed Potatoes with Truffle Oil came highly recommended, and for good reason.  The exterior was crusty and the insides were soft and buttery.  But there are two things this Bite-Sized Blonde can never get enough of, and that’s shoes and truffles.  And these potatoes could have used a little more truffle oil.  Plus, it would just  be weird to get new shoes at dinner.

The Grilled Berkshire Bacon was thick cut and meaty.  It was good, but after the Patty Melt and Butcher’s Steak, I was unquestionably full.  Which is why it was a miracle, or insane, that we also ordered dessert.  We sampled each dessert on the menu.  Not sure my belly or brain registered them, since I was already at the point of no return.

One last thing you should probably know, St. Anselm is owned by the same, culinary inclined duo that own Fette Sau, Joe and Kim Carroll.  That carries a lot of weight, because their food will make you carry a lot of weight, for good reason.    When you win the Zagat Award for Best BBQ in NYC three years in a row, you know you are doing something right.  And that something they are doing right, is the same something they are bringing to St. Anselm.

Whether you’re a Manhattan Man or Borough Babe, St. Anselm is the perfect place for you.  So, go, eat the Butcher’s Steak, and tell me all about it!